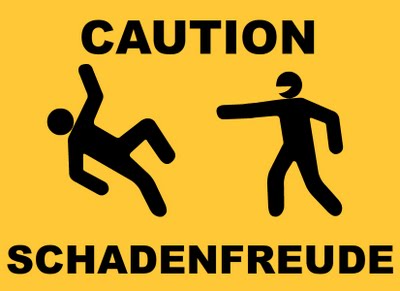 It doesn’t necessarily mean we’re evil. Sometimes painful things just look funny. Like slipping or tripping over something. And the Germans, God bless them, have a word for it! (No, I didn’t just find out and went to immediate “I NEED TO BLOG THIS!” mode, but I just felt like doing it.)

And everyday life is just teeming with perfect examples! Here are a few:

See what I mean? And if you don’t find these funny, you’re either too uptight or have a golden heart. I just hope you’re the latter.

I’m a BIG follower of schadenfreude. It’s how I get through life. It’s how I express gladness, that the bad things may happen to people around me I care about, but at least it’s not me. That’s the beauty of it. It shows a sense of selfishness. It’s a part of human nature we’re prone to.

As long as we don’t get hurt, it’s okay.

That’s why we react differently to things that happen to other people. One friend may be okay being teased for the way he/she looks, and you decide to join in the fun. He/she may be lightly offended, but it’s not serious. It’s just slightly annoying. You laugh it off together. No hard feelings. But some may take it to heart, and that’s when the funny stops, doesn’t it? It’s not schadenfreude anymore because at this point, you also feel pain looking at them being pained. Again, it’s selfish. You don’t find it funny because now you’re feeling pain too.

I’m not in the mood for gobbledygook right now, so let’s just cut this short.

You can’t get rid of schadenfreude. It’s useful human nature. It’s a way of expressing ourselves. It’s not always nice, but people just aren’t. Still, it has the power of making bad things seem better. Anyone who could take a laugh and laugh along with all the problems they’re facing is an awesome person. You can use it to measure how good people are. When things take a turn and stop being funny, but they still confidently smirk, it’s time to question just what kind of “friendship” you have.

Personally, I think the best kind of person is someone who won’t try and look nice and concerned if I fall on my butt just because they’re trying to keep a good image when they’re actually stifling. That’s disgusting. I like people who’ll laugh anyway, but still help me get up.

They enjoy themselves, distract me from my pain (unconsciously sometimes), and underneath all that grinning, they really, truly care.

Besides, life would be boring if you can’t even laugh at problems. 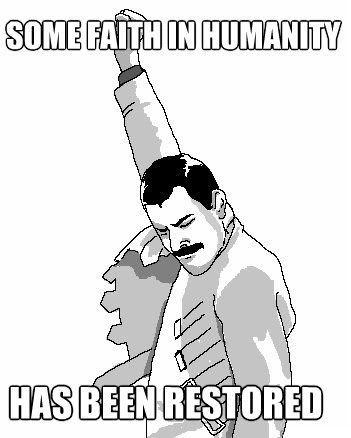 Oh, come on. You know these kind of pics.

And the memes too.

And some of the pics are good, some aren’t. Some are just wacky and overrated. Some seem too good to be true. Nevertheless, these pics are all over social media (and my Facebook timeline) and I don’t think they’ll die out anytime soon.

But there’s that slogan at the end of the pic. The “serious” ones, at least.

I really do think we shouldn’t lose faith in all humanity. Yes, some people are just stubborn, individualist, self-righteous hypocrites that’ll never change if the effort to do so falls short of a divine intervention. On the other hand, some just need a tap on the shoulder to avert their gaze from their little handheld world and look the other way.

Look again at the pictures above. It’s more likely you’ll feel touched, though just a little. Something along the lines of “Well it’s not that extraordinary, but it is a good deed.” or “Nice. Didn’t know people still do that.” and so on. For the cynics, you’ll probably see it as a chance to rant about the rest human population.

But that’s beside the point. What I mean is some of you will decide to copy the kindness, or at least be more aware of the world. The rest won’t give a rat’s ass. Well, most of the rest.

If you’re like me, then you’ll come up with a different trail of thought.

See that brilliant quote above? As much of a cynic as I could be, I realize that that quote’s true. You just have to look for the right kind of people in the right places with the right kind of heart. If you sincerely ask for help and bite them back, chances are they’ll help you. Unless either you or them are asses. In which case, you’d better just stop reading here and improve on your social skills. (For both cases. Either you stop being an ass or pick better people to hang around.)

“So, what does that quote have to do with your views?”

Basically I think the pics in the “Faith in humanity restored!” department don’t show how good people could be. In fact, I think otherwise.

I think… they show how ignorant people are and how concerning the state of humanity is.

Just think for a while. Have you got it yet? I’m still gonna explain, of course. This is how I let out my rants. 🙂

How ignorant do you have to be to miss out on all the kindness that still exists in this world?

Yes, I know the human beings occupying the world are getting more and more evil. But there are also people getting better and better by the minute. These people, while may be the minority in a community, are there. People aren’t born evil. Evil tendencies? Maybe. Like those guys with psychopath brains. It’s how they’re born. But there’s always a choice on how good and bad you could be. Even in an evil place there are people not as bad as the rest.

Then how are we as human beings with insight to feelings and instincts and intellect and all those things we pride ourselves upon not able to find help? Are the good, kind, honest citizens hiding in bunkers? Are they hiding their grace from us? If so, they’re not that kind after all. But if we’re not sensitive enough to see this little things happening around us, or don’t realize them happening to us, then look at these pics and think “The world really needs more of this kindness!” then something’s wrong with us.

Sometimes it’s not that we don’t see them. We just don’t acknowledge them as kind things. We take them for granted. We ignore the fact that not everyone cares enough to do the little deeds that mean so much to others. Then we rant about how cold the world is. It’s a form of ignorance to me.

And to my dear cynics. I’m one too. But while there’re perks of being a cynic, I find myself wanting to trust people more and more. The fact is, I don’t get hurt. So far, anyway. I might misjudge people, but usually my instincts aren’t so blunt that I blindly befriend everyone. So yes, I’m a bit reserved towards some kinds of people, but I don’t automatically go into “eww” mode when they do good things in daylight. Some people are just like that. Not everyone’s in the habit of racing towards doing kindness and bragging about it. It’s not good to generalize the whole population just because a few crave attention and praise.

And the second thing is the state of humanity.

How bad is our state when even the simplest of acts can restore our faith in humanity? How desperate are we to believe that good still exists?

That’s still arguable. You may think people only do big things because that’s what’s noticed. That’s what’s gonna give them good karma back. Maybe you’re just astounded there are people besides you and the good people you know. All this time you think that only the famous give back, and part of the reason is just so they would gain better image. Suddenly all you ever thought about humanity gets turned around.

And they have good grounds for that. Often times we see the rich giving to their communities. Artists and public figures with their foundations and charity events. Then there are the campaigns that seem so surreal. Like those likes on Facebook, for example. It’s just beyond my comprehension. Sometimes it’s just they get more coverage, since they’re spread around on social media, news channels, etc. That doesn’t mean the good people are hiding. They just don’t care about what others think of their good deeds. And that’s the ideal thing to do, isn’t it?

But to have faith in humanity restored just by seeing people from two races holding hands, or a random person giving food to some stray animal… you have to wonder what kind of life they go through. It may be a bad life, not far from criminal activities. Maybe they’re rich but surrounded by fake people. Both are sad in their own ways. They may be grasping for that last thread of hope. While we merely see a reminder of how good we could be to each other, the pics mean something to these people.

For the rest of us? Well, the puns are always entertaining. Just don’t forget the message underneath all the flashy colours and editing.

Bottom line, both the state of humanity itself and the state of human beings are worth watching and nurturing. Just never lose hope. And if you do, then it’s high time you start looking up these pics on Google. Or, better yet, find and do them in real life. 🙂